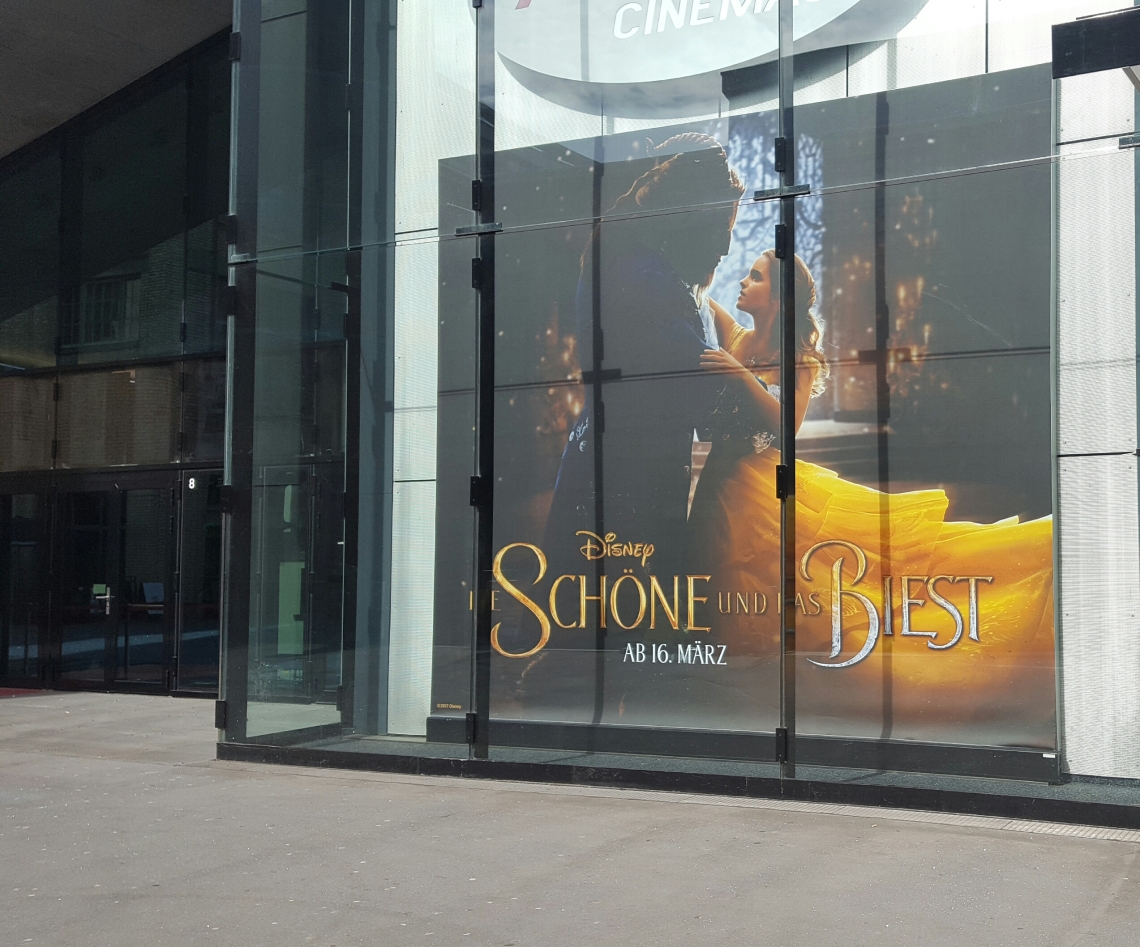 The first day of screening in Switzerland luckily landed on my birthday with the sun shinning bright and the breeze was cool and fresh. There was an option to watch it in 3D but it was showing only in German at Arena Cinemas which was a shame after seeing the transitions that would have been great to see in 3D. Nevertheless, Disney ceases to fail at producing movie nor re-imagineering them and apart from Moana (Vaiana), this adaptation will show you why. Even Hubby was impressed despite it being a princess movie and already asked what would be the next live-action Disney princess movie.

Live action movie, re-telling the 1991 animated version of the classic fairy tale about a young woman who sacrifices herself to save her father from a life of captivity in the Beast’s prison and eventually falls in love with her captor. We learn more about the Beast’s sad childhood before the transformation and also Belle’s infant life before her father started a life of single parenthood. The townspeople portray an even more close minded group but it is explained at the beginning as to why they are unaware of the castle, the Beast, and it’s housekeepers. The housekeepers themselves who in the animation we would have thought, Why should they be punished when they didn’t do anything wrong?, are also punished for a reason. Other than these additions, which is really appreciated, they were true and faithful to the story of the 1991 film.

Jumping for joy when I saw the poster with Emma Watson as Belle. It’s finally official, I thought. I was very very happy because she ceases to fail in any part she plays. Loving her performance in every Harry Potter movie, Ballet Shoes, The Perks of Being a Wallflower, The Bling Ring, and Regression which all in all required a multitude of personalities to portray. Once again, she portrays a bookworm who is brave enough to take her father’s place as the Beast’s captive. She has done as expected, exceedingly well in acting, interpretation and singing.

It’s not Dan Steven’s first romantic movie wearing a tailcoat but after winning the heart of Elinor Dashwood in the BBC TV Mini-Series of Sense and Sensibility. Of course we won’t easily recognize him with a beastly voice but his overall acting from temperamental to humble and princely. With this film, you’ll know that he can actually sing.

Luke Evans was able to portray Gaston as the same self-centered, selfish, sexist male character in the fairy tale. A hunk to the rest of the town’s women but shallow. He definitely looked villainous and still gave me a revolting feeling just like when I was little, watching the animation.

Josh Gad as LeFou isn’t a new voice to animation as he has voiced the beloved snowman, Olaf in Frozen, Chuck from The Angry Birds Movie, and starred in Pixels as Ludlow fighting side-by-side Adam Sandler. Josh convincingly portrayed a somewhat nerdy character, clown-like and with typical slapstick qualities of any film or play. The only difference between the animation and the live action is that Disney allowed his character to develop into becoming a good guy in the end instead of following in Gaston’s footsteps despite knowing he was wrong.

Imagining Mr. Fischoeder’s voice and Kevin Kline’s face did not register in my head as his Bob’s Burgers character is the Mr. Krabs of Spongebob. However, he managed to portray a complete opposite of that character which is a more humble and lonely Maurice. It nearly put me to tears hearing his song.

No surprise that Ewan McGregor would come back to singing and even better, for a Disney classic. Although he tries to keep an French accent, once you know it’s him, you can’t get it out of your head. He did a wonderful job singing which we already knew he could from Moulin Rouge anyway.

Ian McKellen was a delightful Cogsworth although just like Ewan, once you know it’s Gandalf, you can’t get it out of your head. Since Cogsworth is somewhat the head of the household help, him leading them in a battle against the townspeople brought you back to a battle in the Lord of the Rings.

Staring Nanny McPhee actress, Emma Thompson, as Mrs. Potts couldn’t have been better given that she has the motherly figure whether or not you see her in human form or a tea pot.

The Devil Wears Prada’s Stanley Tucci is none other than Maestro Cadenza. He is a new character created for the remake but also possibly inspired by Forte, an antagonist pipe organ in the Beauty and the Beast: The Enchanted Christmas. Stanley is the only actor in this movie who I didn’t easily recognize until his name popped up in the credits.

There are two highlights in this remake regarding the music. First, there are new songs added to certain scenes such as the Beast’s ballad, If I Can’t Love Her, when Belle left to go help Maurice from trouble and the Beast is sad but the song and the tone sounds as if he’s come to terms that she may never come back but also in a way happy that she was there at all. How Does a Moment Last Forever is very simple but very touching especially when it’s first used in a scene with Kevin Kline and the music box and then again reminded by Emma Watson upon visiting her childhood home in Paris.

A second highlight the lyricist, Howard Ashman, had prepared different lyrics for the song Gaston in the animation. He had already lost sight, been hospitalized and then passed away in 14 March 1991 before he could see the results of his final work, Beauty and the Beast. In this 2017 film, Disney tweaked the song by adding unused, lost lyrics of Howard’s into the Gaston and Beauty and the Beast.

It isn’t a secret that Emma Watson is a feminist which is why her day dress looks more like her skirt is tucked up showing her bloomers and work boots as she is a more emancipated Belle. To compare, the presentation of her yellow ball gown was not as majestic and breath taking as the live action Cinderella. Despite the animated sequence of adding gold details onto her gown, it wasn’t as exhilarating or as satisfying. Maybe just for that scene, the atmosphere could be a bit more princess-y in a way and then later on back with the girl power mode. Barbie tends to do it in that way so as not to lose the delicate feminine qualities and characteristics of fairy tale princesses

The Beast’s wardrobe evolved as he did. On an interview with the Jacqueline Durran, costume designer of the film, she said that the Beast becomes more human as he goes through the story, though still in his beast-form.

Disney managed to follow through and kept the core message of the original animated film. What has been added are more lessons that are emphasized from what already there but needed to be more explicit and obvious. New songs in the form of ballads are not bad in any way as it is the style even in the original film. Though not everyone appreciates the tempo and melody of ballads, the lyrics themselves are alive and have brought even more meaning and reason to the film and helped us understand that the characters are personas of actual human characteristics.